If that’s what you’re thinking, you need to reconsider. When it comes to lift truck operator training, VR is more widely used than most expect and already has a strong track record delivering well-trained operators in less time. VR is also a potential career development tool, too.

“Overall, probably 10,000 lift truck operators have gone through VR training,” explains Gijo George, business unit director at Hyster. That’s a strong number given the fact that the first use of VR for driver training only debuted at the ProMat 2013 materials handling show. Since then, the technology has become widely available.

That said, VR is still in the early stages of adoption. George estimates that at most 5% of lift truck operators have been trained with it.

“These may be the early days, but I fully expect VR to mature in the next three to five years,” says Mike Morgan, founder of VR training supplier Really-Virtual Corp. (RVC).

Others in the field agree with Morgan and with good reason. While most people start with VR as a powerful training tool, the technology delivers more.

To start, it can also be used for screening employees. In other words, it helps to determine early on if someone is suited to operating a lift truck in the first place. The last thing any DC needs is an operator to show high proficiency on an orderpicker during training only to freak out the first time doing a pick 30 feet up.

In addition, explains Evelyn Velasquez-Cuevas, director of training at Yale Materials Handling, VR answers the call for training that’s needed right now. “With 40% turnover in warehouse personnel annually, companies can use VR now and reduce idle time in the training process. Using VR allows students to make the most of their training time and continue to practice, even while trainers are giving individualized instruction on real equipment at the facility. Furthermore, VR can enable someone to be better prepared for operating a truck by providing more information and practice up front,” she says.

And as we all know, the best facility maintenance is the maintenance that never has to be done. And from all indications, VR training is a powerful training tool that makes operators safer, more proficient and less damage prone from day one, reducing accidents out on the floor.

It’s important to note that VR does not bypass any of the lift truck operator training requirements set by OSHA. Instead, VR supplements lectures, hand-on training and a final skills assessment on a live truck in a facility.

VR fits in between the lecture and hands-on portions, typically saving time and cost, says Barton. “It’s a great training device for better on-boarding,” she adds.

Just as with non-VR training, the technology allows a person to learn how to use a reach truck, orderpicker, counter-balanced or other class of truck. It is brand agnostic. That said, not all VR simulators are alike.

As would be expected, all systems use a VR headset to deliver the simulation experience to the student. In some cases, the student stands or sits on an actual, stationary truck and uses the actual controls as part of the training.

Another approach is a portable unit that is not a lift truck but allows the student to sit or stand and use the controls on the unit. Yet another option is a portable mat that the student stands on and all activity is simulated through the headset.

It’s also worth noting that the software is not static once loaded into the system. Software can be updated by the supplier when updates are appropriate.

Regardless of the arrangement of the simulator itself, the emphasis in all cases is on providing an engaging training environment that keeps the attention of students. While not real in the traditional sense, VR presents real-world challenges that the student must learn to navigate. In addition, it allows skills development in the safest of environments with live trainer input augmenting the VR instruction.

And, the instruction is quite specific. For instance, it includes basic driving and lifting activity, workplace operation and safety, pre-operational checks, horn operation and more. 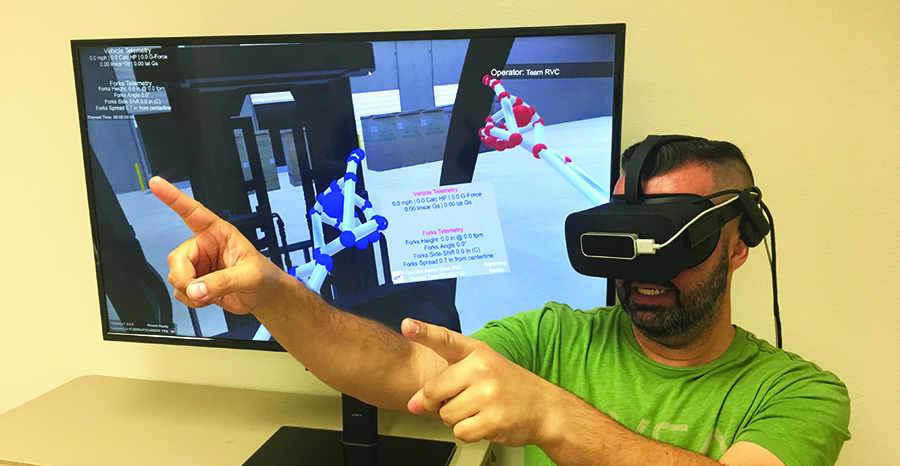 A VR headset delivers the simulation experience to the student in most any setting.

It’s important not to overstate the power of VR. As Velasquez-Cuevas of Yale points out, it does not simulate all possible conditions. It does, however, provide a broad, fundamental baseline that prepares students to work safely in the warehouse, she says.

“Students receive experiential learning that they don’t get in the classroom lecture portion of training,” says Morgan, a military veteran. “The idea here is the same as in the military. Make the training as close as possible to reality. With VR, we create the behavioral reality required to build operator habits and proficiencies,” Morgan continues. It’s also efficient. Highly so. George of Hyster says VR condenses down to less than four hours the instructional content that typically requires 10 hours and more to present otherwise.

It may be early in the adoption of VR for lift truck operator training, but it’s anything but unnoticed. In addition to Modern, the technology has caught the attention of general circulation business magazines such as Forbes and Fast Company.

Ask the people over at Raymond about any awards they’ve received for their VR efforts and the list is impressive. It stretches from business-to-business magazines and the trade association MHI to the Binghamton (NY) Chamber of Commerce.

Interestingly enough, VR acceptance, unlike what some might expect, is not generationally based. “The generational obstacles are minimal,” says George. And, that’s after roughly 100 installs at 80 companies.

Barton of Raymond reports a similar lack of generational resistance. “We’ve found that it’s a great experience with all age groups,” she adds.

One example of this was at Willow Run Foods, a food distributor in Kirkwood, N.Y. Company recruiter Ron Nolan long had trouble finding experienced lift truck operators for his DC. In conjunction with Raymond and several government agencies, Willow Run created an Opportunity Impact Training Program. Candidates ranged in age from 18 to 65.

The idea was to use VR to assess candidates’ skills so they were ready to go on day one. And, it worked. Candidates consistently described the VR technology as engaging and realistic. In addition, VR helped reduce the time between initial interview and starting the new job, too.

Over at GE Appliances’ DC in Commerce, Ga., VR scored another big win, explains Peter Chronopoulos, cofounder of RVC. Lift truck drivers needed to both operate the truck and master use of the carton-clamp attachment to move refrigerators and other large appliances.

“We tailored the software to the specifics of the situation and reduced training time by 50%, says Chronopoulos. “There was no risk to drivers or the appliances during VR training,” he adds. 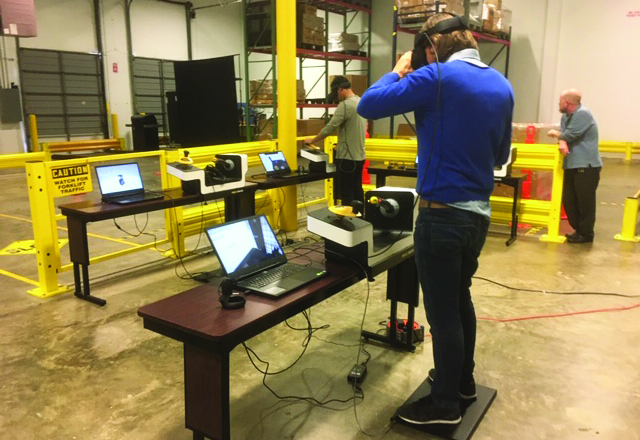 In addition to speeding up training, GE identifies operator strengths early in the hiring process.

As Chronopoulos explains, VR can also be used with experienced operators. RVC, in conjunction with the Midwest Food Products Association annual convention late last year, created a virtual reality forklift rodeo. While rarely seen in the past 20 years, lift truck rodeos have traditionally had no VR component. With VR, lift truck rodeos may even make a comeback. Who knows.

At the Wisconsin event, VR was the centerpiece. Using a simulator, 15 operators showed off their skills from placing and picking loads to driving around a simulated course. Jason Culotta, association president, said the virtual reality rodeo displayed the importance of operator skills and safety practices “in a fun and unique way.”

Just as the rodeo extends the use of VR, initial interest in VR for training maintenance technicians is developing, too. Both Yale and Hyster are considering how VR could be used here. Barton says Raymond is in “the exploratory phase of testing the technology with techs.” None of these companies offer a timeline for development or commercialization of these capabilities.

Summarizing the value of VR in operator training, Morgan of RVC says the point here is not use of next-generation technology. Instead, “VR is all about solving workforce challenges while opening the door to personal development and a career path,” he says. Sounds like a solid approach in a time when the workforce is often the No. 1 obstacle to efficient warehouse and DC operation.